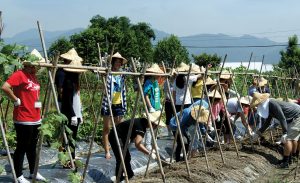 When the Benedictine monks of Saint Vincent Archabbey accepted the challenge of establishing a missionary presence in Taiwan back in 1964, we were actually revisiting a project which we had embraced back in 1922, when Pope Pius XI selected the American Benedictines for the task of establishing the first Catholic University in China. By 1925, Saint Vincent Archabbey, the first Benedictine monastery in the United States, had established Fu Jen Catholic University in what is now Beijing.

the university had to leave Communist China and the project seemed to be over.  However, Fu Jen University was re-established in Taipei, Taiwan, in 1961, under the auspices of the Chinese Diocesan clergy, the Society of the Divine Word and the Society of Jesus. Several Benedictines have since joined the University as professors and heads of department.

Currently, our presence in Taiwan continues to seek to work with the youth in the area of education as a means to establish a bond that can move beyond cultural and religious differences. Through the work of Father David Ho, O.S.B., we also seek to bring the Word of God to the people of the mountain regions of Taiwan, where Father David was born and raised. Every summer, for the past several years, volunteer students and staff members from Saint Vincent College have joined Father David for a couple of weeks at a time to assist in his work. Here again, these young volunteers are able to experience first-hand the joy of serving others, in spite of language and cultural barriers. The seeds of community, as always, prove to be more resilient than the difficult terrains where they are sown.